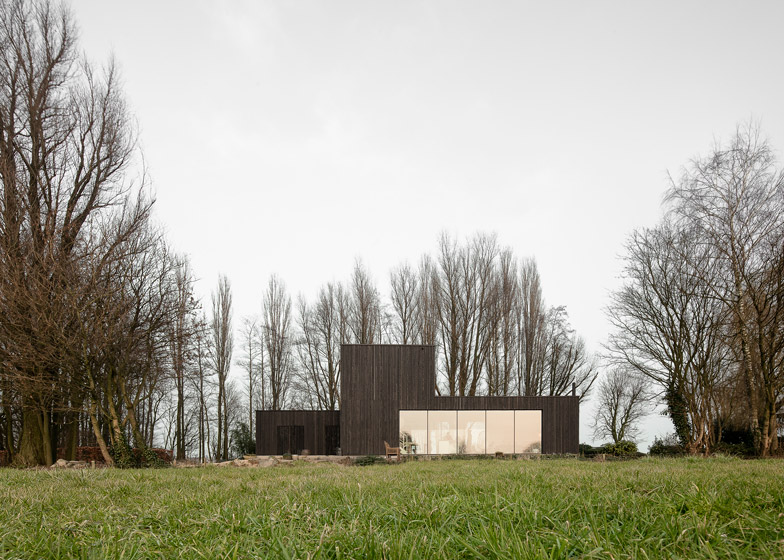 Strips of dark-stained timber give a charred appearance to the three stacked blocks that form this house in the Netherlands, which replaces another property that was destroyed by fire (+ slideshows). 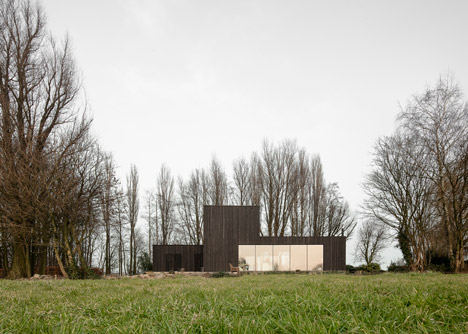 Finnish offices Studio Puisto Architects and Bas van Bolderen Architectuur were asked to design the dwelling – called Huize Looveld – to replace a 17th century farmhouse in the Dutch municipality of Duiven, which was razed to the ground by a fire.

Only a few retaining walls and a patch of scorched earth were left behind by the blaze, meaning the clients and architects had to start from scratch. 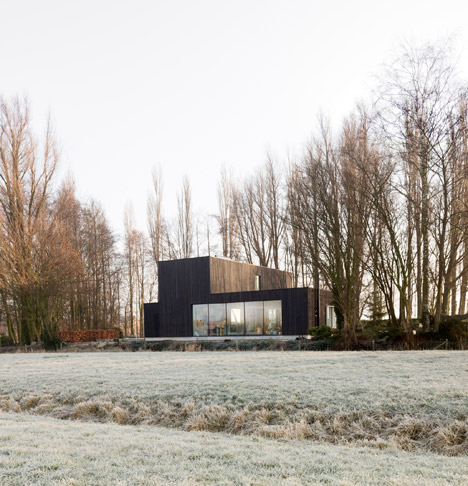 Rather than erect a replica of the historic farmhouse, they decided to create a contemporary property that would be split across three dark timber-clad volumes to provide clear separation between spaces for socialising and the more private areas. 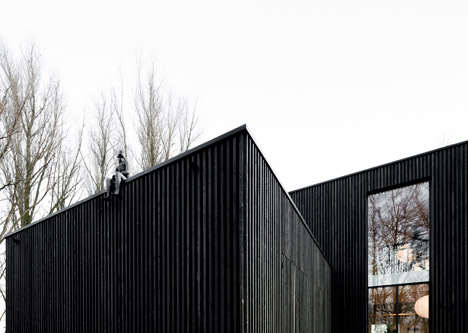 The blocks project in opposing directions towards fields and woodland, but converge in the centre where a dining room occupies a double-height space.

Two blocks conjoin at the corner to make up the ground floor plan, while the third rests over this join to create an upper floor. 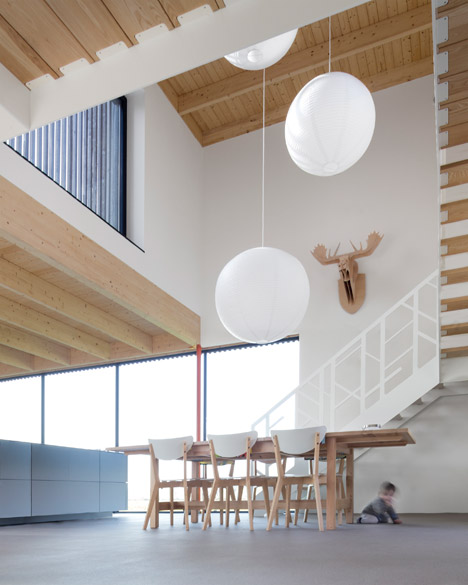 "This project started with a fire – a centuries-old family home in the Netherlands burned down in one night," said the architects. 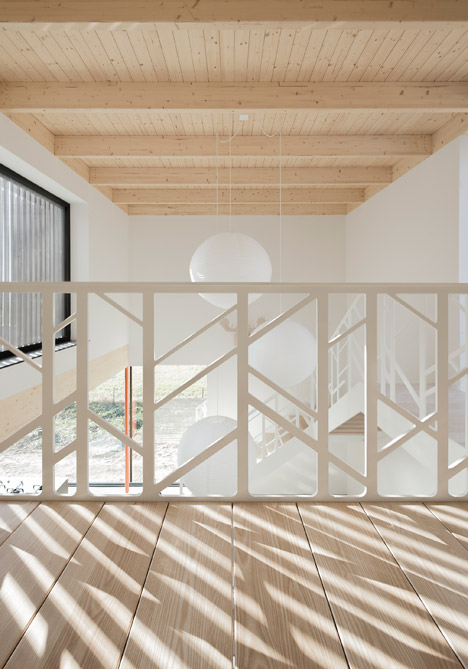 Slender strips of dark-stained larch were applied vertically to the facades of the three wings, with the intention that the building would blend with its backdrop of trees. 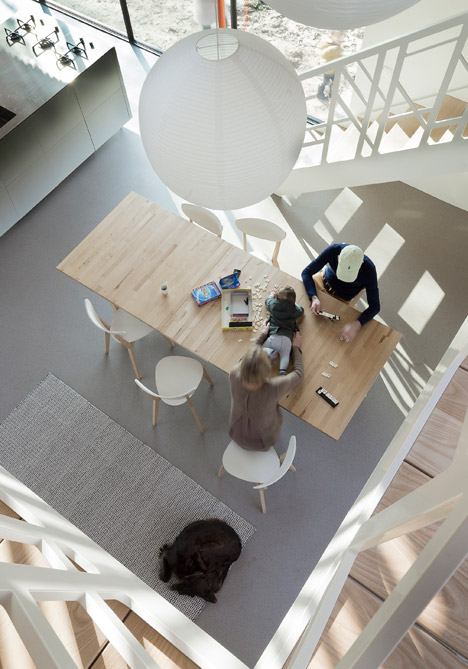 "The new house embraces the landscape and makes interaction with the surroundings its most important asset – both outdoors and inside," said the design team. 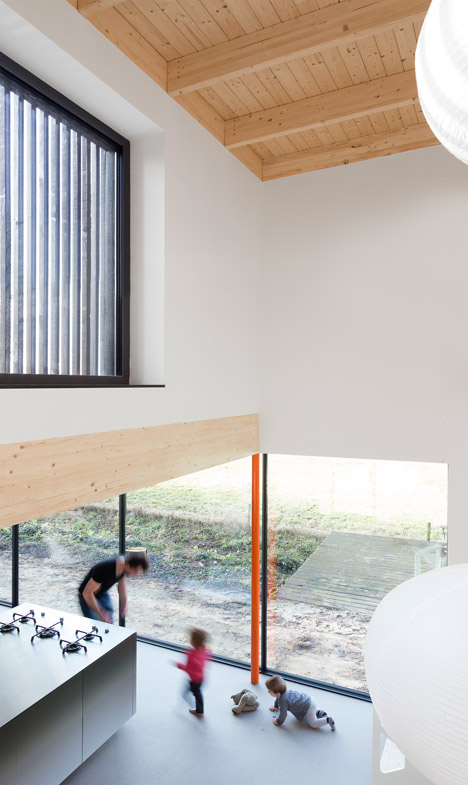 To speed up the construction process to provide a house for the homeless family, these wooden elements were CNC cut and prefabricated across the border in Germany.

They were then transported to the Netherlands and erected in less than a week – part of the architects' aim to develop the site from scorched earth to a liveable home in less than eight months. 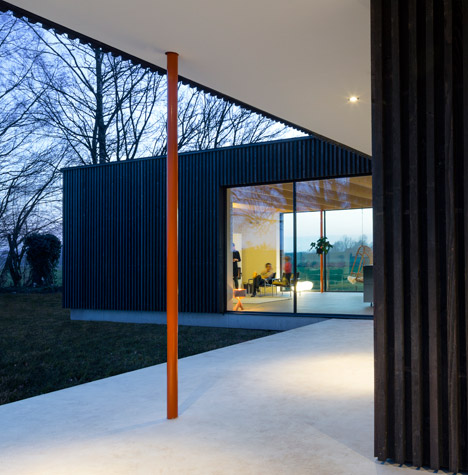 An open-plan lounge, kitchen and dining area are arranged in one branch of the ground floor plan, while the other segment is occupied by a bedroom, utility spaces and a hallway that leads onto a patio shaded by the overhang of the upper floor. 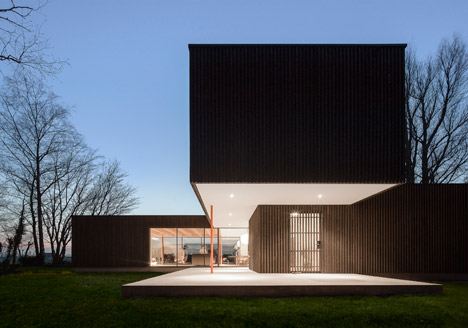 A wide staircase with branch-like balustrades leads from the back of the dining area through the atrium, towards the first floor bedroom and en-suite bathroom. 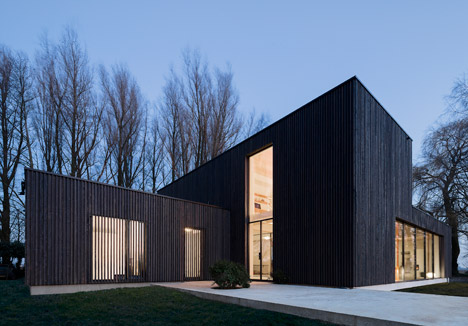 "This project was about breaking new ground, healing wounds, making a fresh start, collaboration, cooperation, listening, site-specific sensitivity, efficiency, cost effective design – in short, what we think architecture is about," added the architects.

Photography is by Marc Goodwin.